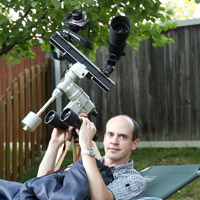 Pierre Martin resides in Ottawa, Ontario.  His interest in astronomy grew at a young age from a curiosity and fascination with the stars.  At the age of 10, Pierre witnessed a dazzling fireball — an event that sparked the beginning of a long term passion for astronomy, and particularly meteors.  In the following few years, the early bedtimes and school homework did not deter Pierre from “sneaking out” in the wee hours of the night to see what the Orionids, Geminids and Ursids were up to.
Pierre has been observing major and minor meteor showers, and submitting reports to several organizations including the IMO, since 1994.
Pierre watched closely for the Perseids enhancements of the 1990’s, followed by the much anticipated Leonids outbursts of the late 90s and early 2000s.  The spectacular 1999 and 2001 meteor storms (as seen in Spain and West Virginia, USA respectively) were events that he will never forget.  The morning of November 18, 2001 remains Pierre’s most impressive observing session ever.  Observing all night under pristine dark skies, he saw 3412 Leonids, including 16 fireballs (between magnitude -6 and -10).  The best five minute period shortly before dawn had 238 meteors!
Pierre can be found on a regular basis at dark skies surrounding Ottawa.  He is especially taken by the relaxing sights and sounds of nature, at remote areas well away from city noise and distractions.  Occasionally, cloudy or frigid weather calls for a big road trip adventure.  Pierre’s most recent meteor expedition was to catch the 2015 Geminids in Texas.  Pierre’s observation setup is very simple — a comfortable reclining lawn chair, sleeping bag, tape recorder, talking clock, clipboard with meteor shower notes and a red light are essential.  During the busier nights close to shower peaks, he uses a long string held straight out at arms length as an aid to quickly identify meteor-radiant associations.  Winters in eastern Ontario can be bitterly cold (-20C to -30C on clear nights), and requires some careful planning to stay comfortable and safe out in wide-open areas.
Pierre also enjoys meteor photography, exploring the deep sky with his telescopes, participating at local astronomy club functions, and sharing his passion at public events.  Other interests include nature photography, reading, writing and camping.  He works as a graphic designer at Ingenium – Canada’s Museums of Science and Innovation.
Tweet