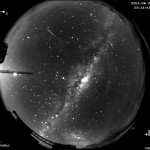 1997 marked the 100th anniversary of the first photographic meteor spectrum. This first spectrum was secured by chance during a routine stellar spectrographic patrol program directed by Dr. Pickering of Harvard College Observatory, in 1897 at Arequipa, Peru at 4 hrs 25 min Greenwich Civil Time. Earlier attempts to visually observe meteor spectra were carried out by A.S. Herschel in the latter part of the 1800’s. Spectra were observed visually but the results were inconclusive because of the fleeting nature of the meteor phenomenon. S.N. Blazhko of the Moscow Observatory secured three spectra between 1904 and 1907. While at Harvard Observatory in the early 1930’s, the late Dr. Peter M. Millman was asked to do a study of the spectra obtained thus far. Only eight meteor spectra were known up to 1931. Peter Millman started his World List of Meteor Spectra and his life long study of spectra, becoming a world recognized authority.

Edward Majden became interested in meteor spectroscopy in the 1950’s. He was then a member of the Regina Astronomical Society, in Saskatchewan Canada. The Regina group secured two of the early spectra on Dr, Millman’s World List, one in 1955 and the second in 1956. This program was directed by the late John V. Hodges, director of the RAS Observatory. Ed Majden set up his own program of meteor spectroscopy in 1972 securing two spectra that year. The spectrographs used by this program are conventional slitless photographic systems. Two of the cameras are modified aero cameras fitted with objective prisms. Another is a 2 1/4 X 2 1/4 Bronica roll film camera with a 75 mm F-2.8 lens using a precision blazed 600 g/mm transmission diffraction grating. All early spectra were secured using objective prisms but in the 1950’s transmission gratings started to be used and they became the preferred method to obtain meteor spectra. Unfortunately, from an amateurs point of view, precision replica transmission gratings are rather expensive.

In 1997, experiments were conducted using inexpensive thin film type holographic interference gratings. On the first try a bright fireball spectrum was secured proving that such gratings could be used for meteor spectroscopy. They were not as efficient as a precision replica grating but with the cost being very low amateurs with limited budgets could now participate in this very interesting research field.