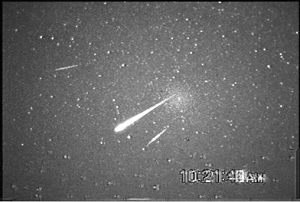 Since the 1990’s, the use of video equipment has become an important method in recording meteor activity. A prime example was the short outburst of the 1995 Alpha Monocerotids. This display was captured on tape by European video observers, leading to updated information on this shower.

The AMS Video Program wishes to complement the Visual Program by viewing the night sky through an intensified video camera. The main method of observation will use a live feed from the intensified unit directly into a desktop computer running the I.M.O.’s Meteor Recognition (MetRec) program. When out in the field for observing stronger displays, a separate video camera will tape the activity and these tapes will be visually inspected and also processed with MetRec.

As you can see from the picture below, the AMS video system actually consists of three different components. Light enters through the external Nikon 50mm F1.4 lens, then is intensified approximately 100,000 times as is passes through the Abex Grade A X1332 Gen II intensifier. The intensified output then passes through a PC164C NTSC video camera equipped with a 2.7-13.5 F1.3 Fujinon lens. The feed is then directed into a computer equipped with a Matrox II framegrabber. For field use an external video camera is necessary to tape the nights activity. This tape can then be viewed on a monitor and ultimately fed into the framegrabber for analysis. 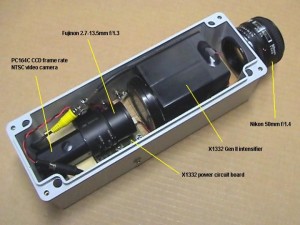