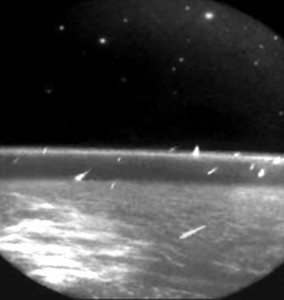 The peak of the 1997 Leonid meteor shower as seen from ABOVE, in Earth orbit, by the MSX satellite. 29 meteors were imaged over a 48 minute period entering the Earthâ€™s atmosphere. Note the roughly parallel paths followed by the meteors, with the entry angle increasing slightly over the period of the time exposure. (image courtesy of Peter Jenniskens)

From earliest times, humankind has noticed flurries of meteors that seemed to emanate from points in the sky at particular times of the year. These flurries, now called meteor showers, are produced by small fragments of cosmic debris entering the earth’s atmosphere at extremely high speed. Each time a comet swings by the sun, it produces large amounts of small particles which will eventually spread out along the entire orbit of the comet to form a meteoroid “stream.” If the Earth’s orbit and the comet’s orbit intersect at some point, then the Earth will pass through this stream for a few days at roughly the same time each year, producing a meteor shower.

Because meteor shower particles are all traveling in parallel paths (see the figure above), and at the same velocity, they will all appear to radiate from a single point in the sky to an observer below (see the figure at the top of the page). This radiant point is caused by the effect of perspective, similar to railroad tracks converging at a single vanishing point on the horizon when viewed from the middle of the tracks. This effect is illustrated in the photograph shown above. Meteors seen near the radiant are approaching the observer and will appear as short streaks in the sky. Meteors seen 45 to 135 degrees from the radiant are moving in a more parallel direction to the observer. These meteors will produce longer streaks in the sky. Those seen in excess of 90 degrees from the radiant are actually moving away from the observer and their paths will again shorten the further the are from the radiant.

Specific suggestions for observing meteor showers may be found on our Visual Observing Program page.