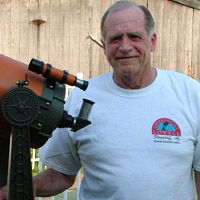 Bill Watson was born in Buffalo, New York, in 1943 and became very interested in astronomy by 1950. Having moved to Kenmore, a suburb of Buffalo, he was not favored with dark skies and spent most of his time reading the astronomy books in the public library and later learning the major constellations. After reading Fletcher Watson’s Between the Planets he became most interested in comets, asteroids and meteors. For his eighth grade science project he studied the April- June 1957 apparition of Comet Arend-Roland; however, he was more impressed by Comet Mrkos three months later. When no comet was available at the appropriate time for his ninth grade science project he documented the asteroid 7 Iris, which reached 6.9 magnitude October 25, 1957. He has continued observing asteroids and has currently has observed 323 of them.

Like most meteor observers the August Perseids sparked his early interest in meteor observing. At one point he asked for maps to plot meteors from the AMS and C. P. Oliver sent him a note in green ink asking him to first submit some hourly counts for the Perseids. Unfortunately conditions were so poor the counts were never sent in to the AMS. Although he lost some of his early records, he still has all his records going back to July 29, 1957. For each meteor he recorded the shower, magnitude, constellations the meteor passed through, time, and remark such as color, speed, etc. When meteors were more than 20/hr. only counts would be made.

If the Perseids sparked an interest in meteors, the Leonids created a bonfire, and at the turn of the century Bill went on a quest to fulfill his life long ambition of observing a meteor storm. The 1998 predicted peak at November 17 19h favored the Western Pacific and Asia. So Bill and his wife spent three weeks in Kyoto, Japan, awaiting the “storm.” Considerable time was spent trying to find an observatory or suitable observation site. After unsuccessfully obtaining permission to view meteors at the University of Kyoto Observatory it was decided that a Buddhist Temple on top of a remote mountain would make an excellent place to observe meteors. So they drove the Hieizan Highway to Enryaku-ji Kaikan (only stopping once for directions) and joined a multitude of Buddhist faithful, who went to this temple to be rejuvenated. The temple consisted of about thirty buildings and Bill had some difficulty finding the hotel. After seemingly endless (but very small) courses of soups, tofu, rice, seaweed and other vegetarian delights Bill waited for 1:00 AM local time to be escorted to the chosen observing site. Unfortunately even Buddhists believe in security light, and the skies became cloudy, and less than 200 meteors were observed that night. There were some bright fireballs and an excellent shower, but not the anticipated storm.

For 1999 the initial predicted Leonid peak was November 17 at 23h UT, which favored site in the Near East and Mizpeh Ramon in the heart of the Negev Desert in southern Israel was chosen as the destination – no chance of any clouds there. In the two weeks he was there, Bill did not see one cloud. A fifteen minute drive south of Mizpeh Ramon was Carpentry Hill (in the middle of the Machtesh Crater) which had a parking lot less than a half mile from the summit. Once atop Carpentry Hill Bill realized as he watched car after car fill up the parking lot below, that he was not the only one that thought this location was the best spot to observe the shower. With a limiting magnitude 6.35 most of the night, Bill had a spectacular night. Between 1:59:10 and 2:09:20 UT, 541 meteors (a rate of 3,193 meteor/hour) were observed. Overwhelmed by the breathtaking display many in the crowed broke into Israeli songs. At last Bill felt he could die happy.

As most of you probably know Buffalo, NY is notorious for its lake effect snow and clouds, so Bill continues to search for clear skies, and in recent years has gone to the Hawaiian Islands and Fanning Island (in the Republic of Kiribati) for the Geminids and Portal, Arizona, for the Orionids.