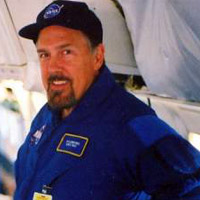 Bob has been interested in the stars as far back as he can recall. His parents placed his crib next to the window as he enjoyed seeing the moon and stars. He began telescopic observing back in the early 60’s with a 2″ refractor on a flimsy six inch tripod. He had to stack the patio chairs three high to see anything high in the sky. His first experience with meteors was a biggie, the 1966 Leonid shower. He knew when Leo would rise and woke shortly after. Unfortunately this was before the peak of the display and the few meteors he did see were nothing like the possible storm mentioned on the news broadcast the previous evening. Only when he came across the February 1967 issue of Sky & Telescope did he realize what he missed. For the next decade and an half he faithfully followed the major showers each year reporting his results to Sky & Telescope. He began dark sky meteor observing in 1974, viewing the impressive Perseid and Orionid displays from that year.

In 1980, a major awaking occurred. He received a sample copy of Meteor News. He was amazed to learn there was a group actually devoted strictly to meteor observing! He joined the group also started to view some of the minor showers list among the pages of Meteor News. 1988 saw the creation of the IMO and he was proud to become one of the founding members. This was a great opportunity to correspond with meteor observers worldwide. Also in 1988, David Levy resigned as Recorder of the ALPO Meteors section and Bob eagerly filled that position.

In 1999 Bob joined the IMO expedition to Spain to view the Leonid storm. He was also part of the ground team that observed the 2001 Leonids from Mt. Lemon. That November morning produced the most impressive meteor display he has witnessed with rates peaking at 35 Leonids per minute. The following year Bob joined Dr. Peter Jenniskens on the Multi-Instrument Airborne Campaign and witnessed both Leonid peaks that year through intensified goggles as the jet flew from Spain to North America.

Currently Bob spends his free time trying to keep up with the demands of three meteor groups. The AMS takes up most of his time as fireball reports and video data arrives on a daily basis. He has recently set up an intensified video camera to record the activity on all clear nights. Since he works for the local newspaper from 2-10am this allows him to still monitor the skies while at work.

He still likes to monitor the skies telescopically using a 6″ refractor, a 9.25 SCT, and a 16″ reflector. He especially likes to photograph the planets using video frames and stacking software. He tries to get out to dark skies at least once a month to view the fainter objects not well seen from home.

Lastly, he was contracted by Springer Publishing in 2007 to write a book on observing meteors. The book is now finished and selling well. It is available from all sources worldwide and hopefully will be a useful guide to all interested in the enjoyable field of meteor observing.