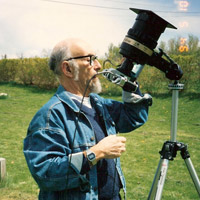 Mike Morrow came into this world on August 24, 1937 in Philadelphia. Pa. When he was still a young boy the family would visit friends and family and return home late in the evening. His Mom would often say “Oh a shooting star”, Mike never saw a shooting star. But while in high school he has a science project and decided to make a telescope. He went to the Franklin Institute and on some nights after the Planetarium show he would go up to the roof to look through the telescopes there. One evening he actually saw a shooting star. That was the beginning. He would go to the Flower Observatory and view through the 18 inch scope there and he met Dr. Charles P. Oliver. Dr. Olivier got him interested in observing meteors. It was really neat doing things with Dr. Olivier!

Mike graduated from high school and Dr. Olivier retired from University of Pennsylvania and moved to Narberth. Mike would go over to Dr. Olivier’s house a few times a week and would talk and he would share his astronomical wisdom. Mike eventually joined the Navy and would send some observations to him from where the ship was in the North Pacific Ocean. After the Navy, while Mike attended U Penn for one semester. He would go over to his house and see the thousands of meteor cards in his basement. Dr. Olivier hired Mike to work on recording data from the cards. Mike would go over on Tuesday and Thursday evenings for two hours. He told Mike he was paying him more than he ever paid anyone else. Mike received one dollar an hour. Some evenings they ended up playing chess with no pay and Mike never won a game.

Mike moved to Hawaii in 1961 and started observing meteors many nights a month. It was great! The Weather Service, where Mike then worked, soon transferred him to the Arctic. He tried to observe there, but at 70.8 degrees north, 24 hour daylight interfered during the summer and aurora messed things up in the winter when it was dark. From the Arctic Mike was transferred to the Arizona Desert. It was hot but got dark during the summer but at least he was able to observe meteors.

When Mike returned to Hawaii he started the Meteor Group Hawaii with a few others from the Hawaiian Astronomical Society. They have done visual and radio meteor observations. Mike now lives on the Big Island of Hawaii where it is dark but there is no power nearby. He soon hopes to have radio observation equipment going again soon. Other than getting old and finding temperatures of 40 through 50 degrees quite cold, Mike feel that life and observing here is great.