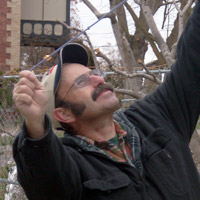 Robin Gray was born in Spokane, Washington in 1950. By age six he had developed a strong interest in both insects and Astronomy. He clearly remembers the beginning of the space program and the excitement of it. He read every book available to him on Astronomy and was particularly interested in Mars. During the early 1960’s he began to read Sky and Telescope, which he has continued to this day. Summer nights spent sleeping outside led to his first experience with meteors.

However, due to the mistaken idea that there was nothing that the amateur Astronomer could contribute to the field he did not get into the observational end of the activity. During the seventies preoccupation with school and living overseas kept astronomy limited to reading. In 1983 he returned to the U.S. and moved to Nevada where he purchased 7×50 binoculars and began observing a few celestial objects such as comets. During early morning commutes to Reno through the dark Forty Mile Desert he saw many spectacular meteors and this greatly increased his interest in them. In 1995 he read Neil Bone’s book “Meteors” and realized for the first time that it was possible for an amateur to contribute to a branch of astronomy. His first systematic observations of meteors took place on October 20, 1995, and shortly after that he joined ALPO, the AMS and the IMO and began spending many nights out observing meteors.

Robin observes from a reclining deck chair and uses a -20 degree sleeping bag, as nights in Northern Nevada can drop well below zero on occasion. He bundles up with hood and gloves in summer as well because of mosquitos, which he finds more distracting than frigid nights. He uses the pen and paper method of recording data except under storm conditions, when a tape recorder is employed. He clips a digital watch to the clipboard so that the time is easily accessible when recording meteors.

Robin observes meteors during the entire year as he considers that data from all times, from major showers to dearth in February and March, to have value. He enjoys the deep solitude of the small hours of the morning, when everyone but night creatures are sleeping. There is a strong spiritual side to observational astronomy besides the scientific aspect. He also contributes observations to ALPO’s Lunar Transient Phenomenon program.

Other interests and preoccupations are Entomology, human evolution and religion, human prehistory, and the Baha’i Faith. He runs his own business doing mosquito and blackfly abatement.