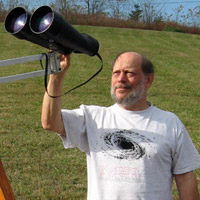 George Gliba was born in Cleveland, Ohio in 1948, and lived in the small town of Chagrin Falls, (20 miles SE of Cleveland) before moving to Maryland in 1979 to work at the NASA/Goddard Space Flight Center. His love of astronomy began with a fireball sighting during a 1959 camping trip. His first meteor shower observation was the 1961 Perseids, seeing 59 meteors in three hours. George has been a true mainstay with the AMS, having joined back in 1963. Only a year later, in ’64, George had plotted over 500 meteors in 57.65 hours. In 1967 he had his best Perseid rates ever, at 103 per hour.

As George joined the USAF in the late ’60s, through the mid-70’s – as an Aerospace Control & Warning Operator – his meteor observations waned considerably. He began observing again during the 1986 Eta Aquarids for the International Halley Watch. He has continued to be quite active since that time. His best meteor shower hourly rate (not ZHR) was the 2001 Leonids, when he saw 750 Leonids and 6 sporadics in one hour from Mathias, West Virginia. That same night, he estimated the magnitude of 1,681 meteors in four hours. “A difficult but rewarding task, especially the last hour!” In 1998, he saw 23 Leonid fireballs in 3 hours and 15 minutes, from the slopes of Mauna Kea, Hawaii, which he stated was “.an unforgettable experience!” No doubt!

George is also interested in variable stars, comets, and deep-sky observing. He has seen 30 supernovae, 76 comets, and 16 novae along with all of the Messier Objects and many Herschel Objects. George has 14 telescopes, including a 20-inch Dobsonian with wife Lynne Gilliland, who is also an avid amateur astronomer.

George is currently a Senior Technical Specialist at the NASA/Goddard Space Flight Center, Greenbelt, Maryland, where he has worked as a contractor on several satellite projects since 1979. He has been employed with the company SP Systems Inc. since 2000. He also enjoys collecting meteorites, Natural History, bicycling and Buddhism.