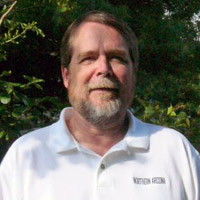 Mark was born in Staunton, Virginia in 1957. His interest in astronomy was a natural outgrowth of the time he spent camping as a child. He acknowledges that a serious interest began with a gift from his father of Peterson’s A Field Guide to the Stars and Planets. Mark would often carry the book up a ladder to the roof of his childhood home where he would scan the night skies with a beat-up pair of 7×35 binoculars.

Mark’s love of the outdoors led him to Fairbanks, Alaska in the summer of 1977. In addition to fighting wildfires, Mark was introduced to the scientific aspect of astronomy when he began assisting University of Alaska astronomers with two different research projects. One project had Mark camping and photographing the Northern Nights, while the other had him making visual estimates of semi-regular variable stars using the university’s refractor.

In December 1988, now living in the Blue Ridge Mountains of Virginia, Mark recorded his first meteor observations, and joined the American Meteor Society and International Meteor Organization. Shortly thereafter he volunteered to index the AMS newsletter Meteor News, reading each issue and learning about the annual meteor showers. In 1995, with interest in email and the internet becoming increasingly popular, a new path for Mark’s interest in meteors emerged.

By chance Mark encountered fellow meteor observer George Zay online and the two began discussing coordinating their observations – Mark from the east coast and George from the west coast. Their efforts worked so well from the start that they decided to look for other observers they could set up coordinated watches with. Out of these first efforts, the North American Meteor Network (NAMN) was established in 1995.

Mark has served as the coordinator of NAMN since its founding, publishing meteor reports, recruiting new observers and providing them with guidance on how to carry out meteor watches. Over the past fourteen years NAMN has grown to become truly international with over 500 members worldwide residing in 36 different countries. Mark has also volunteered his time assisting the AMS, IMO as well as the ALPO Meteor Section and has served in one or more positions for these meteor groups.

In addition to his meteor observing, Mark also spends time observing binary stars and star clusters. He has recently developed an interest in the lunar surface and its various features and is beginning to study it with his refractor. Mark has been employed by the National Park Service as a park ranger for nearly 26 years.