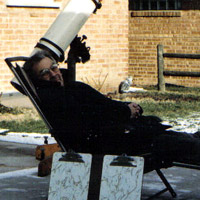 Robert H. Hays, Jr. was born in 1950 and has always lived in the Chicago area. He became interested in astronomy as a boy, which he ascribes as “probably out of curiosity for natural phenomena. He began watching meteors during the 1960â€™s; especially vivid in his memory is a brilliant Perseid fireball in 1965. The Chicago light pollution exploded in the 1960s and â€˜70s, and most of his observing involved the moon, lunar occultations, and planets.

His best meteor observing began in 1976 when he began watching in darker semi-rural sites. The first of these watches was on January 4, 1976 when he saw 33 Quadrantids in one hour with the temperature at â€“2 degrees F. It is no surprise that the Perseids have been his biggest draw; he saw an excellent display in 1980, with rates of about 80/hr. He saw several other good displays during the eighties, but states, “â€¦the August weather has been mostly poor since then.” Most of his recent success with the Perseids has been due to traveling in search of better weather â€“ a meteor observer tradition for many of us!

His observing is often catch-as-catch can, due to variable weather. As a result, he is often found out on nights with no major showers. A true meteor aficionado, Robert will often go out “just to see what meteors there are â€“ and sometimes Iâ€™m pleasantly surprised! There are often night sounds that add to the ambiance. Depending on the season and locale there are owls, peepers, whip-or-whills, crickets, and other sounds that I canâ€™t always identify.”

Most of Robertâ€™s meteor observing is done at the various Indiana Fish & Wildlife areas just across the state line from Illinois. “They have decent skies despite being less than 75 miles south of Chicago. I do occasionally go on camping trips in rural areas and mix in some meteor observing, so I have observed at a variety of sites.”

Robert loves the simplicity of meteor observing. “I just need a chaise lounge, blanket, notebook, or clipboards. Most of the time he just counts meteors and gathers basic data. He only plots when low meteor activity is expected; even then he sometimes gets more than he bargained for! A useful “invention” for making things easier in the field is a “meteor board” consisting of two clipboards attached to a piece of paneling.

The short-wave radio is often used for timekeeping “since checking a watch can take longer than plotting.” .” He uses a tape recorder for strong sessions â€“ “â€¦absolutely essential during the 2001 Leonid display.” At that showerâ€™s peak, he averaged about 8/minute with spikes to about 12/minute “despite it being a humid night with a fog threat â€“ it clouded over shortly afterward. I saw more meteors that night than I have ever seen in a year!

You should be able to spot Robertâ€™s “meteor board” in the photo, with his telescopes in the background. Robert uses large framed-glasses while observing to see more of the sky, but heâ€™s only mildly myopic. Still, he sees the stars best when wearing them. Having recently retired from the U.S. Postal Service after 32 Â½ years, Robert plan on observing for as long as he can!